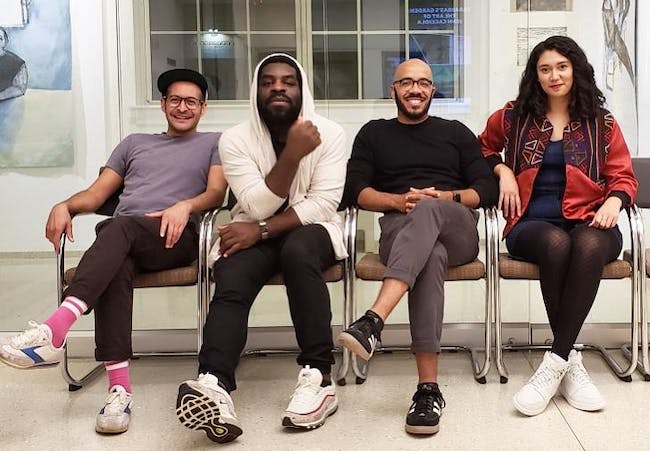 FOURPEAT: A Night of Poetry

"Fourpeat" is the fourth performance of these four poets and friends, whose work covers the sorrows and joys of living in this wild world.

Hanif Abdurraqib is from Columbus, Ohio. His second collection of poems A Fortune For Your Disaster is from Tin House, and was released in September 2019.

Sarah Kay is a writer, performer, and educator from New York City. She is the author of four books of poetry, and has shared her poems in cornfields in Iowa, an orthodontist office in Nepal, a viking ship on a fjord in Norway, an LGBTQ community center in India, a church in New Zealand, a nightclub in Singapore, the Royal Danish Theater in Denmark, a public square in Estonia, Carnegie Hall in New York City, in the back rooms of bars, juvenile detention centers, middle school gymnasiums, and once on top of someone’s dining room table.

Anis Mojgani is the author of five books, most recently, In the Pockets of Small Gods. A national and international Poetry Slam Champion, he has been awarded residencies from the Vermont Studio Center, AIRSrenbe, and the Bloedel Nature Reserve. Anis’ work has been commissioned by the Getty Museum and the Peabody Essex Museum, and has appeared on HBO, NPR, Buzzfeed, and in such journals as Rattle, Winter Tangerine, Forklift Ohio, and Bat City Review, amongst others. Born and raised New Orleans, he currently lives in Portland OR.

Clint Smith is a writer who has received fellowships from Cave Canem, New America, the Art for Justice Fund, and the National Science Foundation. His writing has been published in The New Yorker, The New York Times Magazine, The Atlantic, and elsewhere. He is the author of the poetry collection Counting Descent, which won the 2017 Literary Award for Best Poetry Book from the Black Caucus of the American Library Association and was a finalist for an NAACP Image Award. He is currently completing his doctorate at Harvard University and his debut nonfiction book, How the Word Is Passed is forthcoming from Little, Brown.