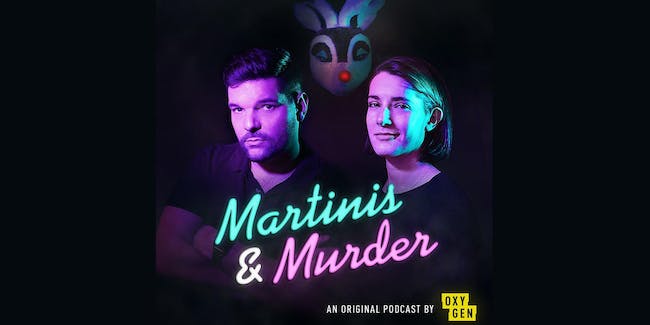 Martinis & Murder is Oxygen’s weekly true crime podcast hosted by John Thrasher and Daryn Carp. From serial killers to mysterious disappearances to infamous murder cases, John and Daryn break down one murder per episode, making heavy subject matter a little more palatable by not checking their senses of humor at the door. Freshly shaken martinis by Matt the Bartender also help. John and Daryn not only tell the narrative of each murder but also delve into compelling and little- known facts about the lives of each victim and killer. What was the motivation? Was the killer a psychopath or a sane person who simply snapped? What was the impact on the victim’s family, friends and community? Co-hosts John and Daryn have interviewed a who’s who of true crime, including Dateline’s Keith Morrison, “Dirty John’s” Debra Newell, Golden State Killer detective Paul Holes, television personality Nancy Grace, NBC News correspondent Kate Snow, “Cold Justice’s” Kelly Siegler, crime journalist Billy Jensen, Mary Jo Buttafuoco, and more. Covered by The New York Times, Digiday, among others, “Martinis and Murder” was also recently listed as a “must listen” by Cosmopolitan.

About the Brooklyn Podcast Festival

Launched in 2017, the Brooklyn Podcast Festival is a celebration of innovative, engaging, and informative podcasts of all genres, the artists who create them, and the community surrounding them. The Festival gives audiences the opportunity to see their favorite podcasts live and a chance to discover new and up and coming shows.

WNYC Studios and Relix are media partners of the Brooklyn Podcast Festival.