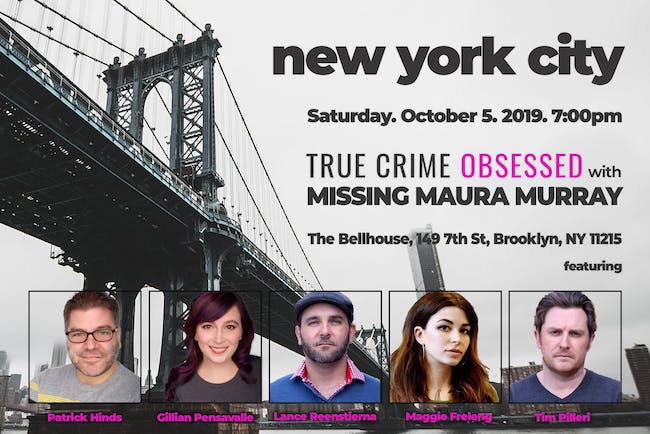 The disappearance of Maura Murray is one of the most infamous missing persons cases in US history. AND YOU KNOW YOU’RE OBSESSED WITH IT. True Crime Obsessed’s Patrick Hinds and Gillian Pensavalle host the unbelievably handsome Tim Pilleri and Lance Reenstierna of the Missing Maura Murray podcast and the beautiful and smart Maggie Freleng of Oxygen’s The Disappearance of Maura Murray for an evening of obsessing over the case. With their signature humor and sass, the TCO team and their guests will talk about new evidence, break down both the Oxygen series AND Lance and Tim’s documentary on the case, and relive the legendary hike to the coordinates. Because Patrick never wants to stop talking about it. Think of it as an obsessive true crime cocktail party – and you’re invited.

True Crime Obsessed is the True Crime / Comedy podcast you need in your life! Each week, hosts Gillian Pensavalle and Patrick Hinds recap true crime documentaries with humor, sass, heart, and just the right amount of snark. In their live show, Gillian and Patrick bring their hilarious take on the absurdities of true crime characters and storylines to the stage, tearing into one of your favorite true crime documentaries using video clips, music, and their signature garbage bell.

Missing Maura Murray is a true crime podcast about the mysterious disappearance of Maura Murray, hosted by Lance Reenstierna and Tim Pilleri. Maura was a 21-year-old college student in February of 2004 when she inexplicably drove three hours from her dorm in Amherst, Massachusetts to the White Mountains of New Hampshire and vanished. At approximately 7:30pm her car was involved in a single car, non-life-threatening accident at a hairpin turn on the dark and desolate Route 112. The few witnesses who spoke with police said she denied their assistance. She was gone without a trace before the police showed up approximately ten minutes later. She has never been seen or heard from since. Now two filmmakers set out to make a documentary and find answers on this mystery by diving deep into Maura's life, the region in which she went missing, and the online world of citizen detectives

Maggie Freleng is a public radio producer based in New York City focusing on mental illness, criminal justice and social issues. She is the Producer-at-Large for NPR’s Latino USA and an Adjunct Professor at the Craig Newmark Graduate School of Journalism at CUNY. She was an NPR Next Generation Radio fellow and 2019 Ford Foundation "50 Women Can Change the World in Journalism" fellow. Maggie is also a TV documentary host for VICE and previously Oxygen's "The Disappearance of Maura Murray".